← Down the rabbit hole?
Another (uber-excited!) quickie! →

The History of a Home

In my last post I talked about some of the frustrations involved with the purchase of our new home site. But I think too often we fall into the traps of ownership, and get bogged down in the troubles and doubts that arise. Let’s take a moment or two to appreciate the charms of the new place in our hearts — and the soon-to-be-new hearth of our home.
As I think I’ve mentioned, I wanted a Goldilocks piece of land:  not too small, not too big, just right. I wanted to be in a neighborhood, but not right on top of our neighbors. The spot had to be close enough to everything — and everyone — that we have grown to love in our current Minneapolis suburb. Enter Walden.
I was on the property’s doorstep the day it hit the market.  The current owners, three sons, were selling the home off as part of their late mother’s estate. I knew pretty quickly that this was not just an anonymous address, but a place that had a history. Sitting in the front yard were two very old, wooden-slatted folding chairs. It looked like the owners had just gone inside for a glass of tea, but no one had rested in those seats for many years. Those were mom and dad’s chairs, we were to learn at closing, and the sons couldn’t bear to move them. So we are guarding them, until I can find a place for them when we finish building our new home. They make me happy.

The property is 1.25 acres, which could have been too big, but the house is nestled up to the street. Later we would learn that by today’s laws it doesn’t meet setback restrictions, but that’s okay. We’ll work with it. The house was built in 1957, and the same family had lived there ever since. They built it out of the bricks of the barn originally housed on the site.  I love those bricks — they have a beautiful golden color, and sometimes I think of all the people over the years that have brushed up against them. We want to reuse them again, but sadly we doubt enough of them will survive to do much. We may just build a cool feature wall, or a fire pit, but I will save some of them.
The house sits down below the street level, which makes me feel like it’s a magic cottage. It isn’t. It’s just an old ranch house, but I feel something when I am there. It has an amazing stone retaining wall, which we believe is about 100 years old. It needs work, but we are soooo keeping it. The previous owners tried to patch it, using cement and muscle, but it really needs to be restored the old fashioned way, just rock on rock. There’s a ton of big rocks on the property, and I want to use them to add to the wall, and make it partially encircle the front yard to make it a special gathering place.

The neighborhood has a cool history. During the late 1800s, Lake Minnetonka was a playground for the wealthy citizens of  Minneapolis.  Folks hopped in their horse-drawn carriages and fled the heat and noise of the city for the tranquility of the big lake a little over 30 miles to its west.   In 1880,  a grand hotel opened its doors, The St. Louis Hotel.   (http://lakeminnetonkamag.com/article/carsons-bay/deephaven%E2%80%99s-historical-st-louis-hotel).     The hotel was quite the place to be — until competition –and a devastating fire — shuttered it forever.  Enter Walter Douglas, who bought the site.  Douglas was an Iowa boy, who came from money (his dad founded Quaker Oats),  but he became wealthy in his own right through various businesses, and especially through the linseed oil business.  Douglas and his wife Mahala built an extravagant mansion on the spot — but first they had to haul all the burned remains from the St Louis away.  They dumped them in what is now our future backyard! 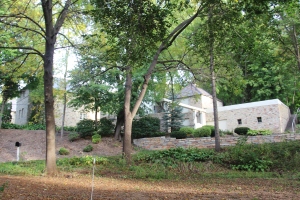 Our home is the site of the estate’s barn.  Across the street is the original carriage house.  When that was renovated, they removed the old arched carriage doors and installed big glass windows.  They left one horse stall, with it’s metal bars, as the library.  The original tack room is still there — but it’s now the bar, and the watering trough that once refreshed horses now waters people.  The original mansion is still there, too, but you can’t see it from the road.  Think I’ll drop off a pie after we move in…

Any-who, when the house was finished some time in late 1911, the happy couple took off to Europe for a furniture buying spree.   After they crossed the last settee off the shopping list, they sailed home — on the Titanic.  Yup.  He went down with the ship, but she came home.  I assume all the furniture sank, too.  ( http://www.encyclopedia-titanica.org/titanic-victim/walter-donald-douglas.html) Mahala was still living in the home when she died in 1945.  Not sure if that’s when the family let the estate go, but now Walden (the estate named after their son) is a charming neighborhood of about 20 homes.  And soon we will live in one of them.  We will not, however, be travelling to Europe to furnish it.

The couple that built the existing home were from the south, and the house reflects that.  I thought of my Richmond, Va grandmother as soon as I saw it — the breezeway, which framed a stunning view, was surely a site of many family gatherings.  When you venture to the back of the house, stately columns greet you — odd enough for Minnesota, weirder still that they are in the back of the house!  The back yard, for us, will be used mostly for the view.  We won’t landscape back here, except to clean it up and maybe remove dead trees, invasive species, or little saplings that are getting in their big siblings’ way. 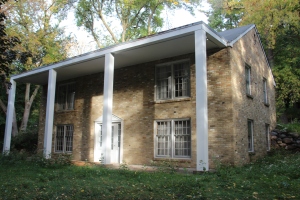 Speaking of trees, there are several awesome ones on the property.  I know we will have to get rid of some (disease, growing too close to the house, etc), but we do hope to save many of the coolest ones.  There’s one in the back we call the Halloween tree.  We won’t save it — it’s pretty diseased.  But it looks cool.  Maybe we can save part of it and it will become part of my annual Halloween party (which I really should be decorating for right now.  I did order part of my costume today, so that’s something! 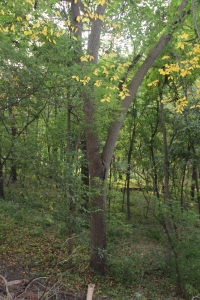 Anyway, as we have drawn our plans for the new house, my mind keeps turning to those whose lives have touched this land.  The high-society folk taking tea on the veranda at the St Louis Hotel, the doomed couple sailing off into the icy sunset, the family with 3 boys who undoubtedly

played cowboys and Indians in the forest below the house.  I want to respect the past while I create our future.  Our main entertaining area will be the front yard, where that wonderful rock wall stands guard.  And where those two sweet chairs sat.  I hope their former inhabitants approve of how me turn their home into our own.

← Down the rabbit hole?
Another (uber-excited!) quickie! →