← Au Revoir, Paris
A Penny and some change… →

A Penny for Your Thoughts

She wasn’t supposed to be ours.

I had finally convinced HWSNBN to just LOOK at labradoodles.  He was of the opinion that no self-respecting man would own a dog with the name “doodle” in it.

But we took a long drive on a Sunday to see the litter.  There were three left: a yellow, a black and a brown.  It didn’t take long to pick her — she reminded HWSNBN of his childhood chocolate lab.  We signed the papers, but, to the shock of everyone, I refused to take her that day.  I wasn’t ready, I said.  I needed to get supplies.  I’d come back the next week.  What I would do now for that extra week…

It was totally unexpected.  Yes, she was 11, but we were unprepared.  And we weren’t home.  We were in Paris.

I’ll never forget the phone call from Singer Girl as we ubered to the airport early in the morning for our flight home. “Put Dad on the phone,” she said tearfully.  Then told us what happened.

We went to the vet to say goodbye.  It was awful, and wonderful.  I am so glad we did it.  I got to hold her paw, scratch her head, kiss her and lay along her big furry body one last time.  We left with a paw print and her collar, then went home to try to move on.

Penny was so many things to so many people.  She was the crazy puppy who wouldn’t eat the first week we got her, yet turned into the ferocious food thief that stole everything she could put her paw on. Stole bacon from the frying pan, shoved her head in the oven to check out a roast, singing her nose and going back for more.  She even went bobbing for bones in a boiling stock pot, escaping through the doggie door with her prize.

Now I have to remind myself that she’s not there to steal my lunch when I walk away from the plate.

She was a great car dog — loved resting her head on my seat from her place in the back.

Now I have to remind myself not to ask her if she wants  to go for a ride when I have a short errand to run.

She loved running with HWSNBN and her husband Monte, chasing deer and squirrels and swimming in the lake to chase sticks.  Now HWSNBN can’t bring himself to run, and I don’t want to go to our annual vacation spot on Madeline Island and be faced with her beach, and the shuffleboard court where she got married.

She tolerated all my foster dogs, puppies to seniors, bigs and littles, chill and maniacs.  She taught them how to dog — when to back off on play, to respect boundaries, to beg, steal and pester delivery men for treats.

Now I don’t want to foster without her help.

What else — “she lived a good life.” Yes, that is true.  But we were sure she had more life to live.  I had planned to have a life-sized picture of her made for Singer Girl to take to college.  The lakes are just now thawing out.  Time for her to drag us down the street, ripping the leash from our hands as she bee-lined for the water.  The brewery’s dog-friendly patio is calling.  This was the summer I would finally take her to Minnehaha falls.

She gave us so much.  Don’t get me wrong: she wasn’t the sweet, loveable cuddle bug so many pets are.  She was honestly kind of an imperious bitch.  We often said she was a human who lost a bet in a past life — if she’d had thumbs, she’d have stolen the car keys, picked up Monte, and hit every drive through in town.

Every State Fair we’d say “man, Penny would love this” as we looked at all the food so carelessly carried and dropped.  This year’s State Fair will be the first one without Singer Girl, and without Penny.

I think that’s one of the things that makes this so hard.  I didn’t really worry about my empty nest that much — but now it’s more than empty.  It’ll be hollow.

Will we get another dog? Maybe? Some days I think no.  I can’t imagine getting another dog that my kids won’t really know.  The dogs are weirdly like book ends: we had our first, Sam, before we had babies.  Then Penny was our woofer world for 11 years, leaving us just when the kids will.  Our next one will have to bring us full circle I guess: dog after the kids.

But the other night we talked a little bit about it.  Would we get one? When? I know we won’t foster until July for a number of reasons — that was decided before Penny died.  Now I am afraid we will fall desperately in love with the first foster we have, bereft and eager to fill that furry void.  HWSNBN says no, that won’t happen.

He also said he’d never own a doodle.

For now, Penny sits in a box, next to her collar, a photo and the paw print from the vet.  When Sailor Boy comes home on leave, we’ll save some quiet time to say goodbye with the kids.  Then we will do it again in her favorite place n the world, Madeline Island. When we got about 45 minutes away from the ferry, she’d start perking up in the car.  Straining forward to see out the window, eager to win the “who’s going to see the lake first?” game.  She adored the ferry.  We’ll take her to the shuffleboard court where she and Monte were married.  We’ll find a stick and throw it.  We’ll remember every time we got tired of doing that, and swear we’d do anything to have her demand we throw it again.

Time to kennel up. 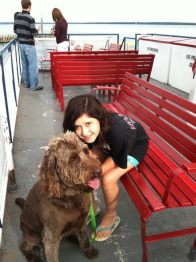 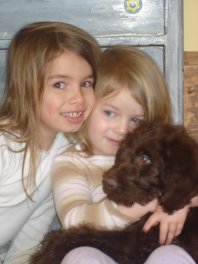 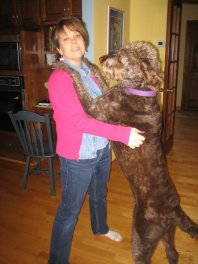 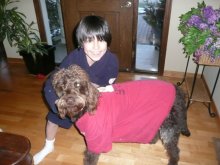 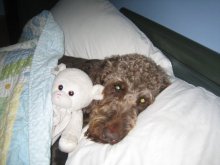 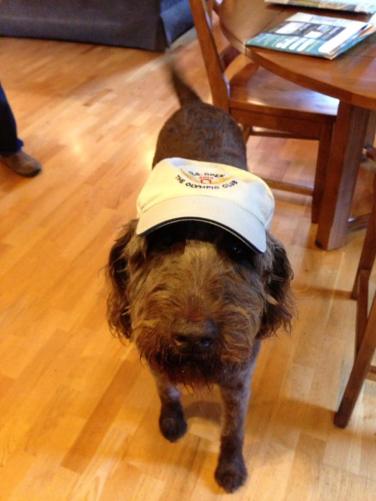 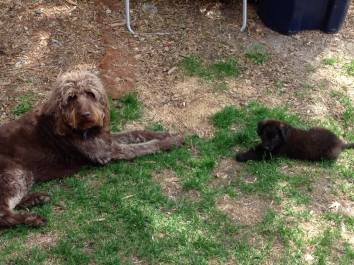 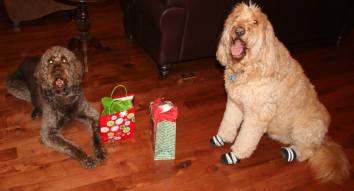 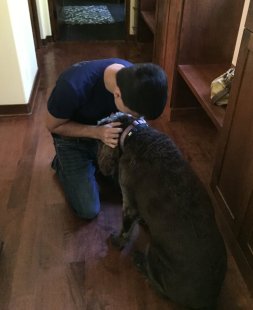 ← Au Revoir, Paris
A Penny and some change… →