← Up the Down Staircase in Dubrovnik
Fantasy Island →

Doubling Down in Dubrovnik

You may recall our decision to avail ourselves of tour guides for the rest of the trip while floundering about in Split.  On our second full day in Dubrovnik, we took two.

First up: a walk-the-walls tour.    As always, I was in charge.  I don’t necessarily mind that, but being responsible for all the info all the time means I am not always on top of things.  I knew roughly where we needed to meet, but I had negelected to get precise info.  There were tons of tour groups, speaking so nay different languages.  I was trying to hobble, leading my crabby crew up and down the stone staircases.  I have no pride, or qualms, when it comes to asking for help, so I grabbed a tourist guide and asked: where does the Dubrovnik Walks (http://dubrovnikwalks.com/) tour meet? I was right: all the guides know each other. The gal rolled her eyes and gestured outside the city walls, so we scurried off.  Found another large group — asked them — and they pointed me to a group that was already walking away.  The guide said yes, this is the right group, but no, we couldn’t join without first checking in.  We rushed to the proper place, checked in, attached our little headsets, then frantically (with the aide of a sub-guide) to catch up with our crew, about about 10 minutes late.  Like every other person we met in this magical town, everyone was gracuious, kind and understanding of our touristic feebleness!

So: we started our tour hot, late, sweaty and grumpy wth one another.  The hot and sweaty part never went away, but the grumpy part sure did.

There is no persepctive from which this city doesn’t captivate.  Our tour guide was terrific: all of his speech was peppered with deferential references to his beloved speed metal, which of course endeared him to this rocker chick and her musical daughter.  But he was appropriately sober when required, especially when telling us what it was like as a child fleeing from the under-siege city with his mom and living in a refugee camp.

I took tons of pictures, and they say more than I can.  Here are some of my favorites, with periodic captions: 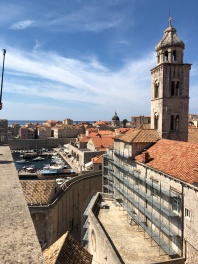 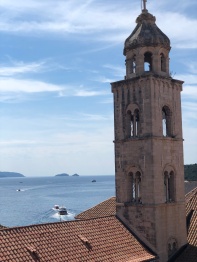 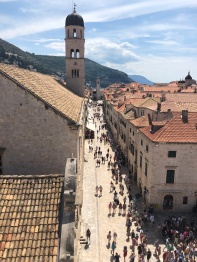 HWSNBN, wearing his treasured Croatian soccer jersey, wondering where I am. I was up in one of the tower niches, like the one you see behind him, capturing a dazzling succession of pictures, which you will see below.

One of the funniest moments on the tour was also one of the most weirdly charming.  While strolling about at ground level the previous day, Singer Girl notced what we thought was a tennis court, stashed behind a small alley entryway.  But up on the wall we got a closer look.

Croatians love their sports — and especially basketball.  But the city walls of Dubrovnik are not very forgiving when it comes to space.  So when the city needed a public basketball court, they changed the court configuration.  Our tour guide said he rememebred when this was a dirt area.  He and his friends celebrated Croatia’s historic third place win in the World Cup 1998 by kicking up a storm in this spot. The court may be fancy and new, but nestled into the centuries old city walls, it retains its whimsical appeal.

We completed this tour, then went tograb some lunch and regroup before our next one.  We had lots of time — I had selected a city tour for early evening, so it wouldn’t be so hot.  So that meant two things: back to the beach, and then a nap.  Our trek to the starting point of this tour was easier, since this time we knew where we were going (of course, we still had to DO the trek.  By the end of our 3 1/2 days in Dubrovnik, we would walk about 37 miles, or 322 flights of stairs, or more than 90,000 steps.  And yes.  I was in das boot).

Our tour guide strolled us around Dubrovnik on street level, where we admired architecture, lamented war damage (this guide, too, was a war refugee), marvelled at history and folklore, and fell deeper in love with the city. 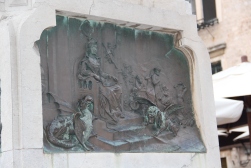 We saw so many cats — I have never seen so many stray cats so well loved.  Everywhere you looked there were water and food dishes set out for them.

So much charm and color! 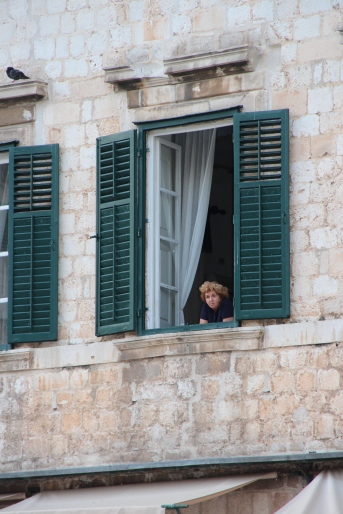 After asking for restaurant suggestioins, and what we should do on our last day, we said goodbye to the guide then went home to clean up to go eat.  The next day was going to be good: a trip to fantasy island, and another Croatia World Cup game!

← Up the Down Staircase in Dubrovnik
Fantasy Island →