Fantasy Island was in our rear view: now it was time for futbol.

We limp-hustled to the apartment, switched out some last minute laundry (can I tell you how much fun it was to use that old school clothes line, watching our modern day duds flap in the breeze above that ancient wall?), and head to our recommended venue: an Irish Pub.  I knew we were late, as usual.  HWSNBN thought I was exagerating, as usual.  We arrived to a SRO venue, and I resigned myself to stand for the next few hours.  But the atmosphere was great: on the patio they were going to show the Argentina game, inside the main event (Croatia v Iceland).  Drinks were flowing, and food looked fanatastic. But HWSNBN did not want to stand, so left and found ANOTHER Irish pub around the corner. We managed to squeeze into a table when some non-soccer fans scurried out.  That was the good news.  Bad news? No food would be served any longer, and the bar would only sell beer.  Singer Girl was displeased.  During halftime they had to wander off in search of sustenance!

We were cozy with another table — a couple from Norway.  They were rooting for Iceland, but we liked them anyway.

Croatia won! It was fun, but not the same frenzied joy as when we were in the park in Split — but still awesome to be there.

The night was young, even if two-thirds of us weren’t.  We wandered around the electric city, finding areas we hadn’t yet explored. 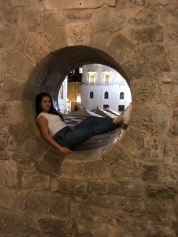 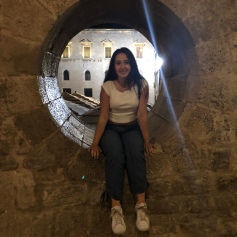 We found an odd little corner, nestled up against the southwestern edge of the wall. It was mostly residential, with so many cats it felt like a trap.  Like the cats were in charge, as they lured my companions into a small square…

I stayed behind, just in case I needed to fetch help. but my surroundings were just as creepy: 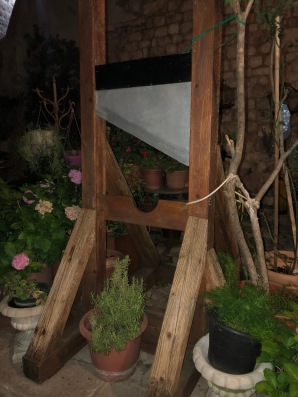 Yes.  That is a guillotine.

We decided to wander elsewhere, and hopefully find a little liquid courage. 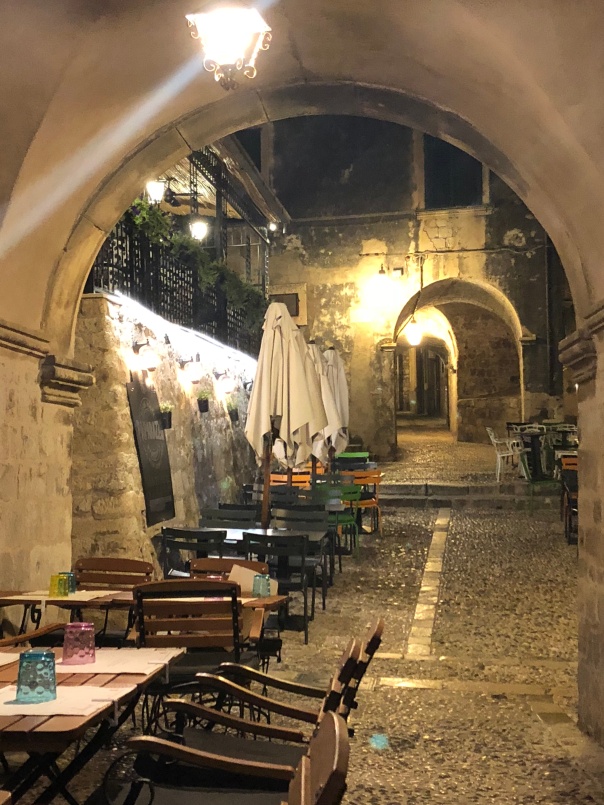 We closed the place down, and headed back for our final Croatian sleep.  In the morning, we had to be out of the apartment by 11, but we were allowed to leave our luggage there.  Our wonderful hosts texted me in the morning and said that becasue it was raining, we could stay until we departed for the airport, which was more than generous.  The rain wasn’t enough to keep us inside — we had shopping to do.  So with the treachery of slippery steps in mind, we ventured forth.

We finally got a good, uncrowded shot of the infamous “Steps of Shame” from GOT fame.  Did you know that was the single most expensive television scene ever shot, as they producers not only had to shut down several streets, they had to pay all the retailers on those streets.  Worth it, though.  The steps themselves? Go to the Jesuit high school one of our tour gides attended!

Every time we went up this staircase, HWSNBN suggested I reenact it (you know, nekkid).  I politely declined, but if I had, I would’ve availed myself of the nearby bar’s tribute cocktails:

Another thing Dubrovnik is famous for is having the oldest working pharmacy in Europe.  Originally part of a Fransciscan monastery, it was founded in 1317.  They didn’t allow photos inside, but these are some shots of the surrounding grounds (with some more doors to feed my obsession):

I tried to google translate the Italian above the door, and it has something to do with beating an infernal enemy.  Dante’s Inferno was published a few years after this place opened shop, so maybe it was kind of the in thing. You know, hell and purgatory and all that.  Good times.

We were looking for a few different things.  I was smitten with the traditional Dubrovnik jewelry — fillagree metal balls were in stores all over the city, and we searched street by street until I found the one shop I had seen the day before that looked more traditional than all the rest. 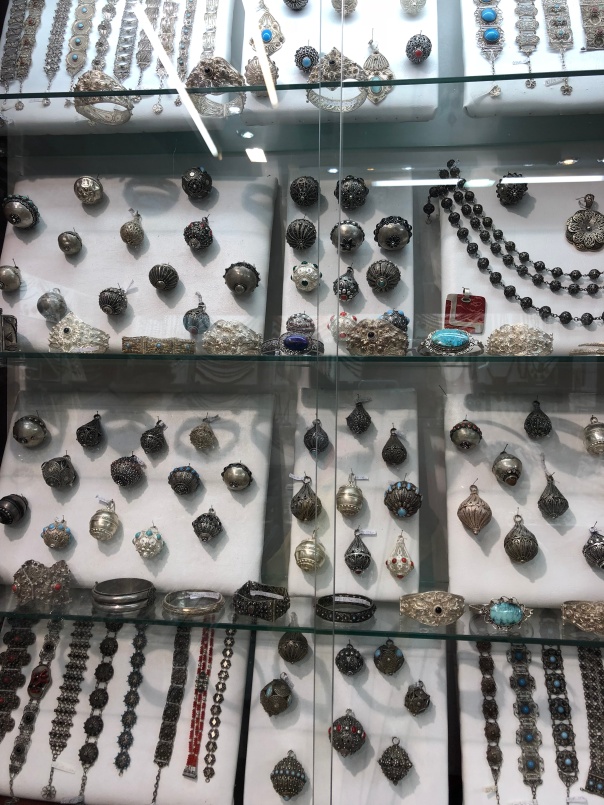 I wanted one for a Christmas ornament, but one of that size would’ve cost me a thousand dollars.  So I hemmed and hawed and pondered and finally settled on one as a pendant.  Singer Girl also found some fantastic keepsake jewelry.  If you are in the area, go see the father-daughter team at Beni, od puca 25 (that’s the address).  Singer Girl couldn’t decide what she wanted, so they created something on teh spot — took one bracelet, cut it down to her size, and made earrings out of the removed pieces.  Very cool, very special.

Our last stop was to get a necktie for Drummer Boy.  Why? Evidently the cravat was invented in Croatia.  Who knew?

Purchases in hand, it was time to retrieve our luggage and head to the airport. It was not easy saying goodbye to Croatia. What had started as an afterthought, the second fiddle to our trip to Greece, ended up being so much more. But now we turned our eyes southward, to the land of gods.  First stop: Santorini.  I’ll save the details for the next entry, but I’ll tease you with these snaps of our hotel upon arrival: