We are back to fostering after an almost 4 month break. Pre-COVID, there weren’t enough fosters, and animals were languishing in shelters and rescues all over the country. But when folks realized they had lots of time on their hands, fosters and adopters came out of the proverbial woodwork, so I stepped back. I thought I’d let some of the new fosters have a shot at dogs, as we simply couldn’t keep up with demand.

But last month Secondhand Hounds received word of a couple of dogs in Kentucky who needed help — and one was heavily pregnant. Popeye, the daddy, is a one year old Neapolitan Mastiff.

Mama went into labor before she could get up here to Minnesota, and now, instead of one foster for dad and one for mama and her brood, we needed many more fosters, as Olive Oyl decided her job was done and elected not to nurse the babies. So: fosters experienced in bottle or tube feed itty bitties were needed, and since I had experience from last year (remember the yellow lab puppies I had?), I was asked to help out.

Mama gave birth to 14 pups: 4 were stllborn, and 4 passed before we received them. So that left 6 babies, divided among 3 fosters. I got Thimble and Alice when they were just 11 days old, eyes and ears still closed. They weighed barely over a pound each!

Every 2-3 hours I bottle fed them formula. We use a very interesting formula recipe, which includes goat’s milk, whole Greek yogurt, whole ayo, karo syrup and egg yolks. So every few days I whipped up that mixure in the blender. The pups liked the formula,but hated the bottle. I swear I must’ve tried 5 different types of bottles and nipples. The feedings were taking about 45 minutes each time, and I was pretty wiped. I was spending about eight hours a day total feeding them! So at night I decide to tube feed them, so that cut the feedings to about 20 minutes total. But during the day I wanted to keep them on bottles, because they seem to need the sucking.

When they were 19 days old, Thimble got really, really sick. I consulted many times with fellow fosters and our vet, and we all decided she needed help. Her breathing was labored and she was so, so limp and lethargic. Before I handed her off to the emergency vet, I actually said my good byes. The vet confirmed aspiration pneumonia. I wasn’t surprised, given that they just fought and struggled with their bottles.

She came home and both puppies promptly moved into an oxygen chamber that took up half my kitchen counter.

We started antibiotics, and switched from bottles to syringe feeding. They loved that. Just sucked the formula down! We also started adding canned food to their diet, a little at a time. I had a feeling they’d be happier when they got real food, and they were.

They were also a mess!

Soon they were gaining weight, breathing better, and scooting around! Every day we try to make the food little thicker. Now I am taking dry kibble and soaking it in formula to mix with the canned food. As their teeth grow in, I will start making the much dryer and crunchier.

We are socializing now too. I invite folks over all the time to play with them, as I want the pups to love everyone. Thimble is definietly the more easy-going of the two, while Alice s a bit of a diva. Thimble is also MUCH bigger, and looks like she will be jowlier than Alice.

I’m about to go on a trip, so they will stay with another foster for 5 days, and I am eager to see how big they get by then. Thimble grew by almost 60% this past week, Alice by 25%. Pretty sure I won’t recognize them when I return!

Once again I take too long between blog posts.  I just haven’t had any big doings in my life to report on — no trips, no big changes, no crazy silly stories.  We’ve just been kinda settling in to empty nesting.  It’s going well.  Trying to do date nights every week, but life sometimes gets in the way.  HWSNBN has been travelling, I spent October getting ready for our annual Halloween bash. Oh: and we got back into fostering.

As you know, we have had a gigantic hole in our hearts and lives since we lost Penny.  Fostering was just too much.  But before we went on our Greece and Croatia trip, there was a dog languishing in the office, waiting for a foster with no kids, no dogs, no cats.  That was us.  I told the family if Sirius was still looking when we got back, we were taking him.  So we did. 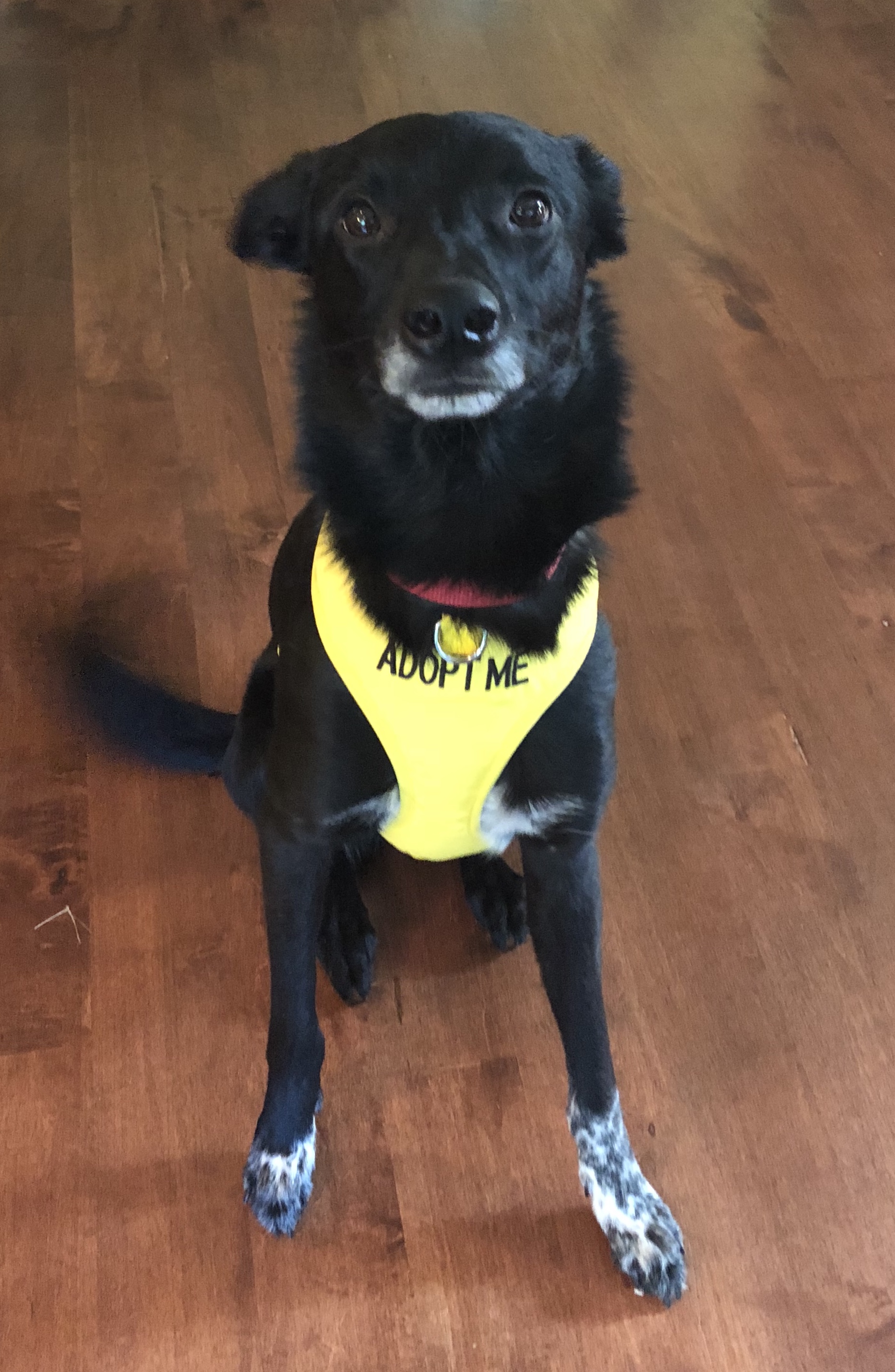 He wasn’t an especially easy foster, but so sweet. He had become increasingly aggressive in his adoptive home.  The owners tried everything they could, but he was just too afraid of the world.  Interestingly enough, this was from birth.  He had been the most skittish puppy in the litter, but everyone assumed he would grow out of t with love.  But he didn’t.  Just like some people are naturally shy or hesitant, Sirius needed to learn how to control his environment.  Moving him into a kidless, dogless environment would be a good way to reset to factory settings as it were.  There were a few days when I was worried he would never be adoptable, but Second Hand Hounds believed in him, and footed the bill for an in home trainer, leash aggression classes, and a doggy behavioralist.

With time and training and medication, he became a happy dog.  The cutest couple ever applied for him, and we all took a chance.  Would he be OK in their urban yard with a short, see-through chain link fence? With dogs and humans and cars and critters and kids everywhere?  He was.  He is now renamed Pico de Gallo, and is well loved.

We are often asked “are you going to keep this one? How do you let them go?”  We loved Sirius, but he was not our dog.  We entertain too much, and want a dog that likes to party at home and go out in public, not to mention one that will welcome other dogs into his home so we can continue to foster.  Our life would’ve been awful for him.  And I often say the best part of fostering IS the letting go: it’s when you get to complete a family circuit.  My favorite moment is taking and  sharing that photo of the once-lost dog going home with his new family.  Best feeling in the world.

But what about us?

After Sirius, we took in Goober, a temp foster.  Goober was a silly, intensely lovable pit bull that seriously wanted to be with us 24-7.  And by with us, I mean physically a part of us.  When I showered, he stood with his nose pressed up against the glass, as if fearful I would wash down the drain.  HWSNBN thought Goober was great, but couldn’t commit to a pitty.  “Too affectionate,” he said.  “I need my personal space.” 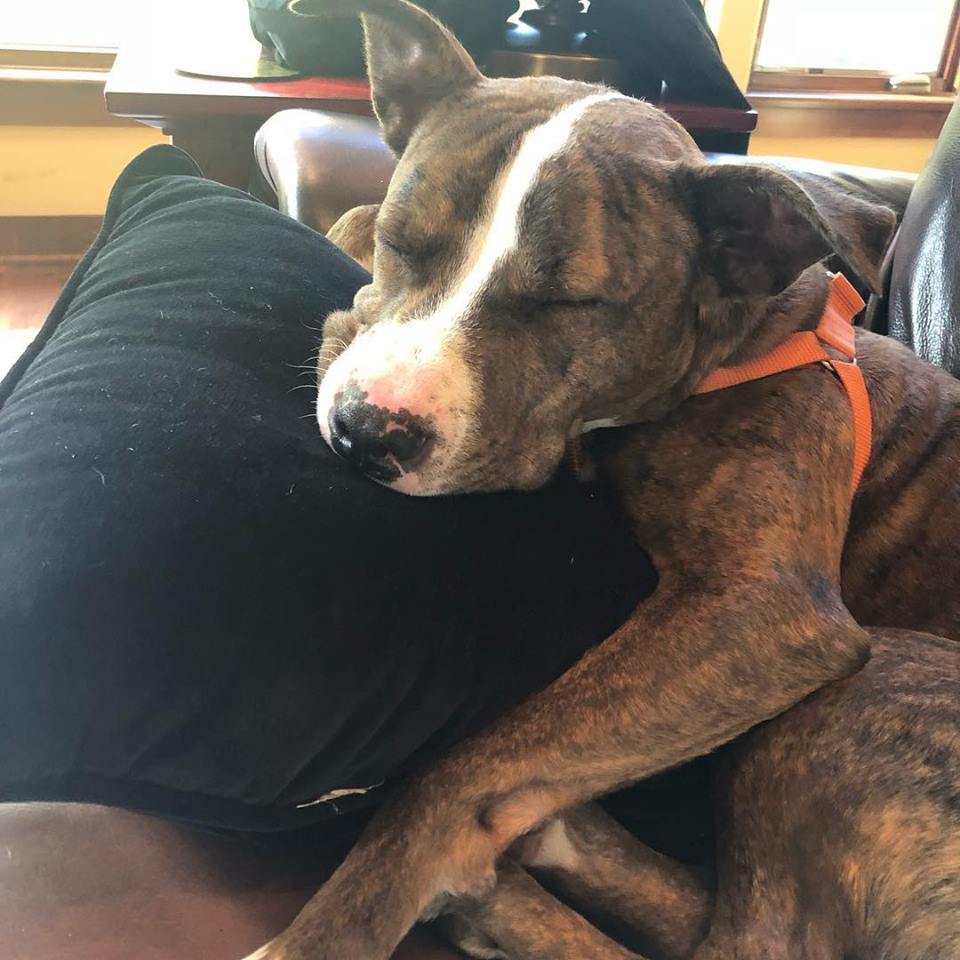 So Goober was not our dog.

Next came Lady.  On paper, Lady seemed very much like what we would want.  House trained, crate trained, god with kids and dogs.  She was some sort of greyhound mix we thought, so probably a good running partner.

We brought her home and set about getting to know her.  She was easy: slept through the night, didn’t steal food, didn’t bark when folks came to the door, etc.  Very sweet, but not overly clingy.  But there was something missing.  We just didn’t feel it.  I asked my husband what he thought. “About adopting her? I mean, she’s great and all.  But shouldn’t she go to someone who is excited about her?” He made an excellent point. 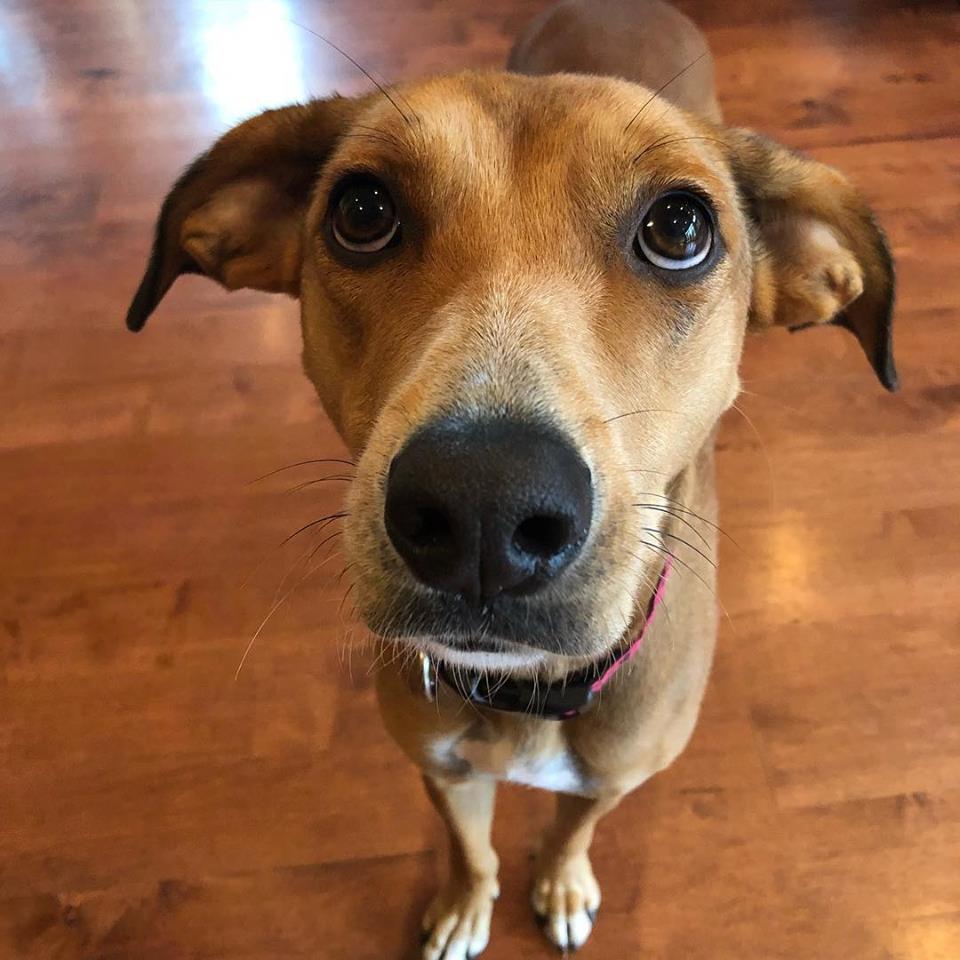 So she went on the website, and shortly we received an application from a veterinarian.  She, her husband and their two young daughters had lost their two dogs a few months back, and were looking for a new one to fill their family’s dog-shaped hole.  They met lady, and loved her.  They were giddy about her.  The little girls couldn’t stop talking about her.  She was THEIR dog.

Shortly after Lady left us, I got an email from her adopters.  They had renamed her, as most do.  Her new name was going to be Penny.

They did not know about the sweet beast that left us in April.  They had picked her name for the color of her fur — the exact same reason we had named ours Penny.

It was a sign to me that our Penny had moved on, and now it was time for us to welcome a new furry family member.

Meanwhile, I had seen a picture of a dog on the Facebook page of one of our partner rescues in Kentucky.  Something hit me in the heart, and I immediately asked if she was coming to Minnesota.  If so, she was mine.

She came to us as Sissy, but has now been renamed Stevie Nicks.  We don’t know what she is (DNA pending) so not sure how big she will grow to be.  Some say she is done at 6 months old, others think he will get bigger.  She’s only about 26 pounds, which is small for us.  She is a complete ragamuffin thing.  She is not house broken.  She may never be a runner.  She is not a late sleeper (we’re hoping she grows out of that quickly).  But we love her. On paper, she is very wrong for us.

My kids think it’s weird that she is so similar to our Penny, but most folks adopt a type.  I mean, if we always did yellow labs, or chihuahuas, or boxers, wouldn’t they all be similar? But they are all different.  And they are all perfect.

Over the years I have had to say no to many adopters, not because they weren’t great but because  simply can’t share a dog between applicants.  Often they come back to me later and thank me for saying no — because they had since adopted THEIR dog.  Had they taken the other, they would never have known this one.  I feel that way about Stevie.  I am grossly infatuated with her, and can’t keep my eyes and hands off her.

The perfect dog is a fairy tale — or, as I called it when I told folks we were “fostering with intent,” looking for our unicorn.  But they are like glass slippers.  They don’t fit everyone.  But they fit the right one. 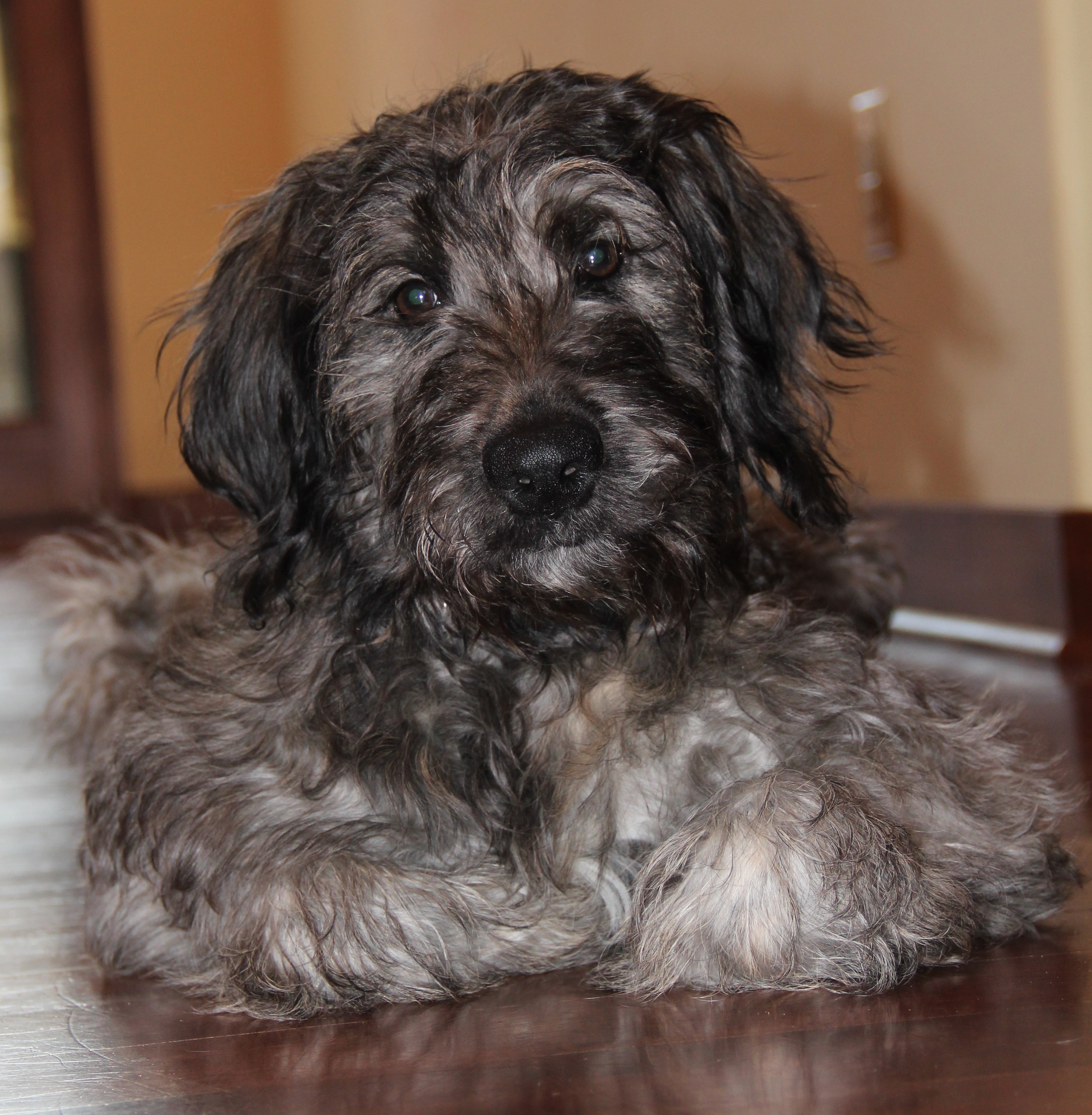