I think it’s gonna be a bit crazy these next 2 weeks.  I tried to carve out time today to work on the headboard I am building for Carter’s room, but had Walden business prevailed.  Day started researching cable options and discussing said options with Matt at In Focus (they are doing all the low voltage stuff).  Needed also to approve the landscaping contracts — grading starts Thursday (assuming the carpenters get their butts over to the site and build the pergola tomorrow!).  Got word from Kraemer & Sons that it’s time to move utilities into our name — wahoo!

This afternoon Super Bill needed me on site to go approve pavers choices.  At least, that’s what he said.  Ended up going room by room checking on stuff, answering questions from the subs (what side do you want the garbage disposal on, wher exactly do you want the shower wand to hang, etc) and clarifying stuff with Bill.  Poor Bill.  I need to bring him beer.  I think the deadline is starting to get to him.  Between me not remembering why I chose what I did, and what I chose and for what, and discussions he and I have had and forgotten over the past nine months or so, he’s ready to bang his head against a wall.  Poor, sad, stressed out Super Bill.

Lighting continues to me a thorn in my side.  Started today with a call from Bill about lights and mirror placement.  Before he even finished the question, I realized I made a mistake ordering lights.  Wanted lights in either side of my mirror, but as Rich’s vanity has lights above his mirror, it will look weird.  So sending back what I chose and getting new.  Then Bill wondered what my bedroom chandelier looked like, ’cause he couldn’t find it.  Eventually located it in the master shower, being used as a table for the plumber.  The we could only locate one of the bedside lights for our master.  Then realized we were missing a light for the entry way.  Took a field to my parents house (hi Sharon and Wayne!), and found teh netry light but not the bedside light.  Ugh.  Hopefully it will turn up as we start moving stuff around.

Remember those stupid exterior lights?  I ordered some about 6 moths ago, and we realized they wouldn’t work, so I revamped that plan.  Took me a few more months to find a solution, and now I have extra lights laying around that don’t appear to have a home, but I am missing other exterior lights.  Also can’t find the guest room light, which I had to reorder when the original one was discontinued. We’re also missing two wall sconces for the basement hallway.  And the paper lanterns I ordered for Frankie’s room are not exactly up to code, as we need to make them street legal.  Oy.

Tomorrow the appliances arrive, as does the vinyl flooring for the kids’ rooms and the closet organizers start going up.  And maybe all the lights will be up and running!  Plumbing is trickling into place, with some faucets installed, as well as a toilet or two.  Maybe I will get some time to work on that headboard! 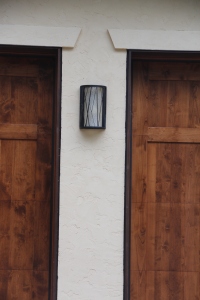 An outdoor light between the garage doors

Poorly lit image of a sink in the master bath 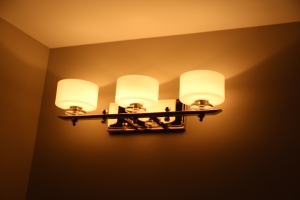 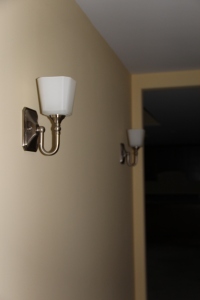 The newly sealed and grouted hearth wall. The fireplace should be up and running tomorrow! 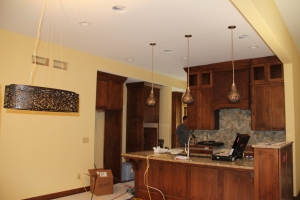 Another view of kitchen, with dining room chandelier on left (that’s Super Bill lurking in the back) 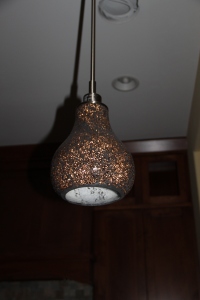 a weird, wanna be artsy view of the inside of the dining room chandelier 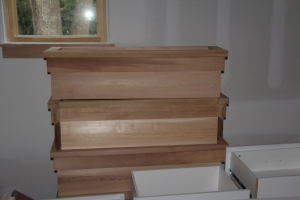