← Foot up, blog down
Up the Down Staircase in Dubrovnik →

Omigosh no one is gonna read this — it has been 7 weeks since I posted!  I am sorry! I will try to make these next few posts long, full of gorgeous pictures and at least adequate writing.

On June 19th we embarked on our Great European Vacation (yes, I kept playing the Holiday Road song in my head).  First stop: Split, Croatia.

Why Croatia, you may ask? Why this trip at all?

Last year we asked Singer Girl if she wanted to go on a senior trip, and if so, where? She quickly narrowed it down: Argentina, Thailand, Australia, and African Safari, Egypt or Turkey.  Hm.  So we discussed the pros and cons: winter in Argentina and Australia (out).  Deathly heat in July in Egypt and Thailand (out). Political unrest in Egypt and Turkey (out). Safari was an almost, but we decided to put that one on the back burner until Sailor Boy was out of the Navy.  So I asked her what she wanted, and she said sun and ancient ruins.  Greece was an obvious choice, especially since she has been obsessed with the Disney movie Hercules since she was in preschool.  Decided to add another country to round out the experience, and a little research led us to Croatia.  Man am I glad it did!

We did the typical late night flight from the US, with a layover in Frankfurt, where we watched a little World Cup soccer and some of our group napped.

As we approached our first city, Split, it was clear that this was going to be a beautiful place.

We lived at this one: https://www.airbnb.com/rooms/2885183. Below is a picture of the gate to our apartment and the street we lived on. Two beds, one bath, and a communal kitchen/living room space — accented by a bottle of the local liquor, raki (it’s like Eastern European moonshine).

Soon we headed out to dinner at Frane’s favorite restaurant, F de Mer.  I’ll do a whole blog entry on the food we ate on this trip, so I won’t go into details here.  But the walk down the Riva was stunning, and it was a great intro to our vacation!

Plus: Singer Girl got to have her first legal drink! She wanted a fancy cocktail, but they do drinks differently in Croatia, and very few bars do frou-frou drinks.  n fact, if you want a gin and tonic, you order the two things separately, and they bring you a glass with gin and a bottle of tonic for you to mix.  She settled…

The next morning those with two healthy feet went running.  I did not.  When they returned, we decided to get a little sun, and ventured to Bacvice Beach.  Croatia may not be known for it’s sandy shores, but the water is gorgeous.  HWSNBN and Singer Girl went swimming, but my broken foot and I stayed back, leery of the rocks underneath.  But at least the foot got a little Vitamin D! 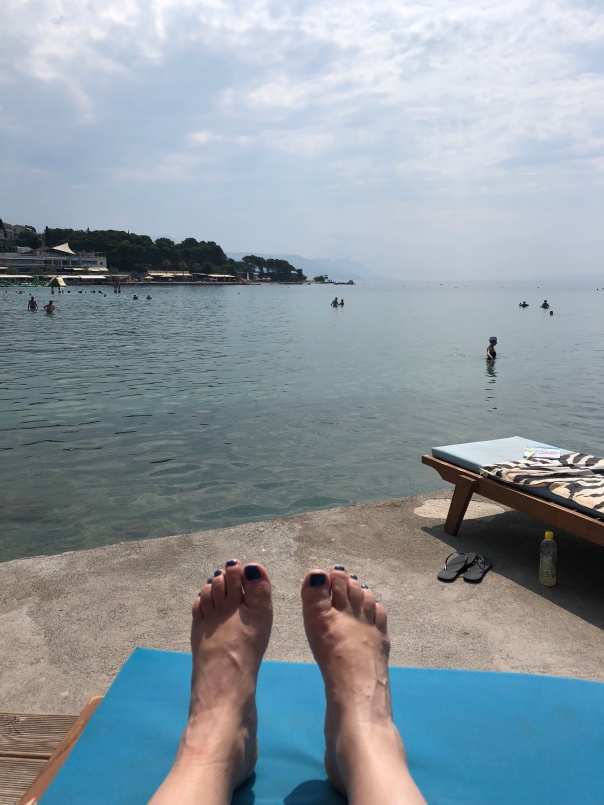 Soon it was time to get back for a shower, a late lunch and then the day’s main event: the World Cup!

When I realized we would be in Croatia when their team played Argentina, this quickly became on of the most anticipated moments of our trip.  Frane suggested a public park, where they had a huge TV, beer for sale and tons of rabid fans.  Foolishly we only arrived an hour in advance, so were destined to be standing and squished.  No matter: this was such a cool experience! And to see the home team absolutely CRUSH perennial favorite Argentina 3-0? I will never forget that! I hope the US can gets act together and start adoring this sport before we host World Cup in 2026! 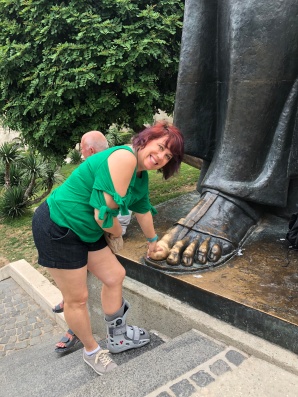 Rubbing the toe of Gregory of Nin for good luck

Argentinian fans soon to be disappointed 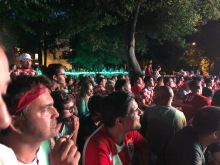 the tension was insane

the crowds were amazing

such a cool experience

Afterwards we went to a square outside the cathedral (steps from our apartment) where people gather every night for live music, drinks and fun.  Everyone was in a great mood — and Singer Girl and HWSNBN actually danced a bit, which was awesome (and a little amusing).

We were originally scheduled to do an island hopping boat tour the next day, but the rain rearranged those plans.  So it was a sight-seeing day, which I love.  Singer Girl grumbled at first, but I think she enjoyed it. Before the rain fell, we saw amazing ancient architecture, from sky high cathedrals to the dungeons where Daenerys Targaryen keeps her dragons (GOT reference). 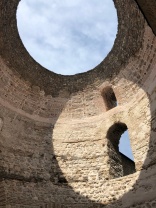 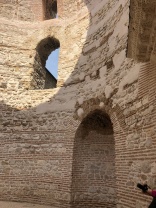 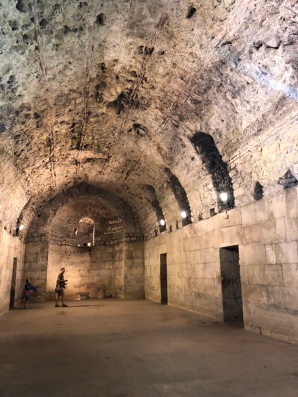 I think that’s when my travelling companions realized guided tours had their place: I usually do a lot of research and guide everyone, but this trip I just didn’t have enough planning time. We wistfully eavesdropped on a group, realizing they were getting way more info than we were. So when we were done, and the rain set in, I hopped on the computer and scheduled tours for our next few stops.

Late that night we found ourselves wandering, as I always like to do on our last night somewhere. That’s when we found our favorite bar of both countries, Marcvs Marcvlvs Library Jazz Bar (https://www.facebook.com/marvlvs/). It had great music floating down the alley, and looked warm and cheerful and happy, so we stepped in. It was like a cool little library, with cubby holes and cats (cats were a recurring thing on this trip). Then we noticed the cucumbers.

There was a cucumber in a fruit bowl.

There were paintings of cucumbers on the wall. 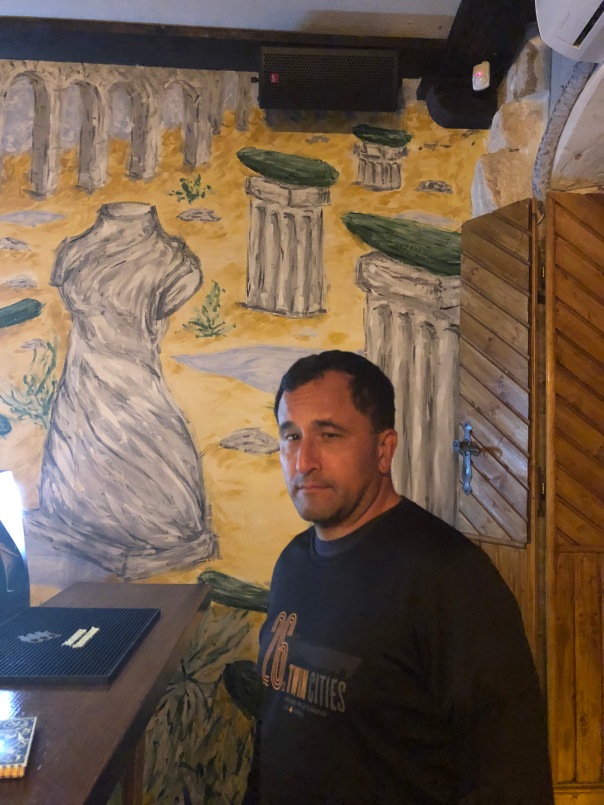 Come to find out, the makers of Hendricks Gin liked the bar, so offered to invest.  So: cucumbers.  Very funny, very fun. Definitely stop by, if you’re ever in the ‘hood.

The next day was a scramble.  We had to be at the docks on the Riva for a boat tour by 830, but also had to have the whole apartment packed up, as we were leaving that evening and had to be out of the room before the boat tour would be done.  So packed it all up, and hustle down to meet our captain.  I was a little apprehensive, as Frane had cancelled my old reservation and scheduled this one instead, and I never could connect the boat captain.  I had no idea what we were getting into.  But wow was it fun!

When I saw the seats on the boat we originally WERE going to be riding on (chairs you straddled like horse) and the cushy couches on our boat, I thanked Frane in my head (and my backside).  We spent the day tooling around different islands, stooping for swimming (I got to jump in!), snorkeling, sight seeing and lunch.  Below are some of the awesome pictures from this beautiful day! 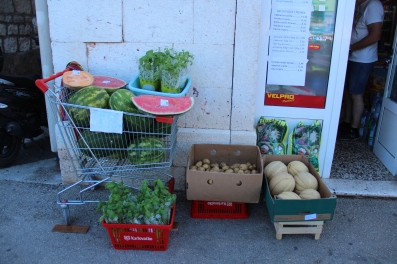 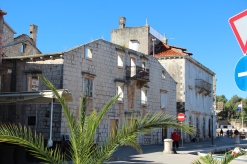 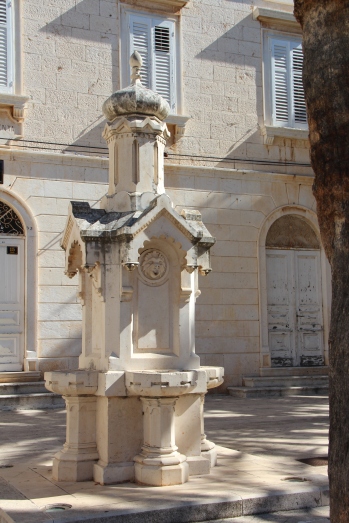 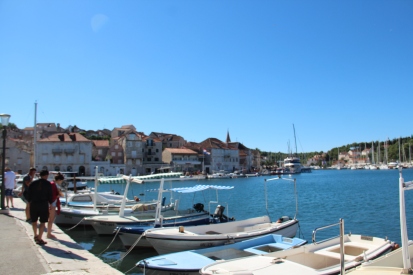 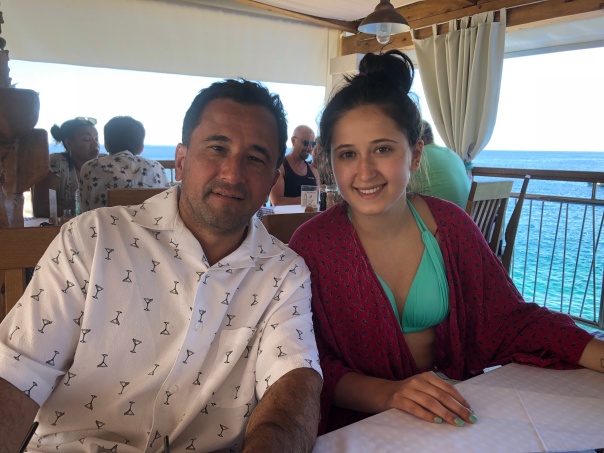 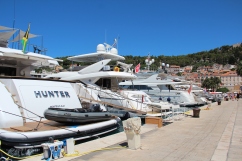 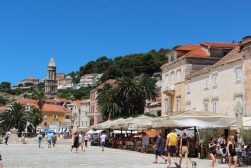 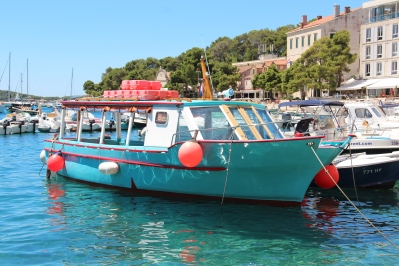 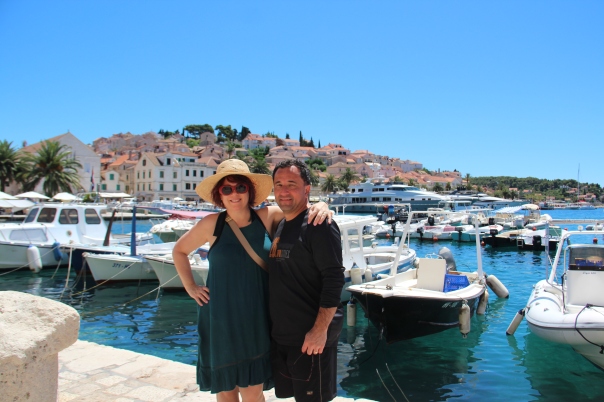 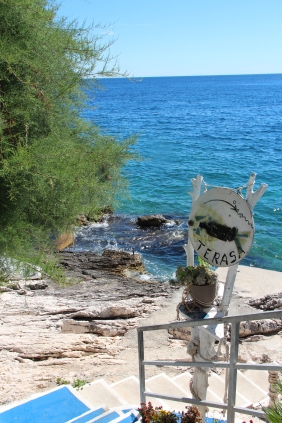 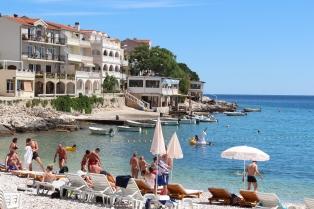 Afterwards we met Frane at the apartment, where we quickly changed clothes and repacked before Frane drove us back.  He was so kind — even offered to help us out if we needed anything during the rest of our time in Croatia.  Seriously: if you go, these are great people to rent from!

The Split airport was…interesting. There were 4 gates total  – tow domestic, two international. The domestic gates were literally on the other side of security.  We waited and waited and waited — while the folks at security just kind of hung out.  Finally, about 30 minutes after we were supposed to leave (no notice of delays or anything), the security people basically changed their hats and started boarding.  It worked, I guess, but not what we were used to.  Next stop: Dubrovnik!

Posted on July 15, 2018, in Uncategorized. Bookmark the permalink. 1 Comment.

← Foot up, blog down
Up the Down Staircase in Dubrovnik →