And the Nominees Are…

So my dance card is shaping up for the next several weeks!

Oscar nominations were announced yesterday — of the 9 films nominated for Best Picture, I have seen 4, which is pretty good. I typed up my new “to-do list,” and was able to cross off at least one in each major category: 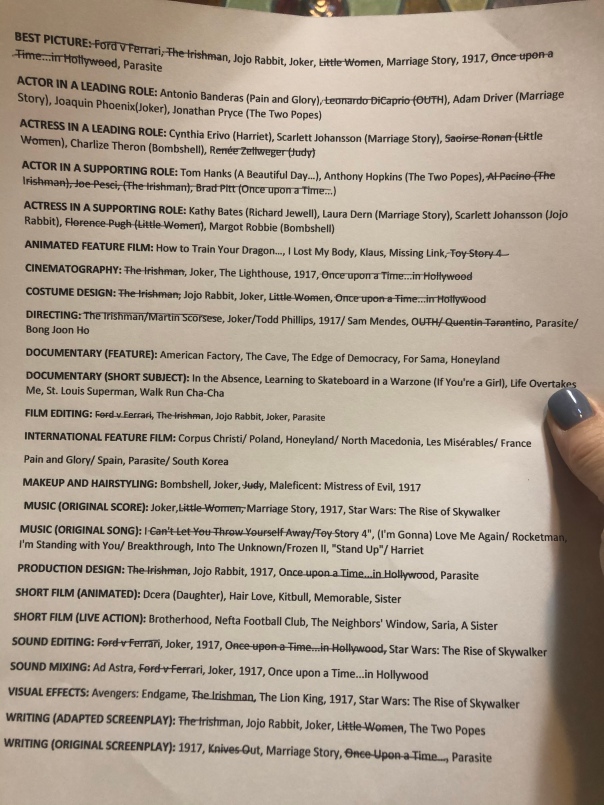 My first plan is always to see all the Best Pic noms, then fill out the rest of the major categories. So that’s 11 movies minimum to see before the big show, which is on Feb 9th. This year I really want to attend one of those film fests where they show all the shorts, so gotta start looking for that.

Before I make my plan, I have to see which ones HWSNBN wants to watch with me. I assume he’ll say yes to the Joker, The Two Popes and A Beautiful Day in the Neighborhood. He’d like 1917, but war movies have become very hard for us to watch since Sailor Boy joined the Navy. I’m on the fence as to whether he will want to join me for Marriage Story, Bombshell or Richard Jewell. The rest I know he will say thanks but no thanks, lol!

So if you really want to see one of these, let me know and we’ll get it on the calendar! This week I am focussing on stuff I can see online (new foster puppy, book club weekend, and big Secondhand Hounds event to plan for next week). But starting next week, if you want to find me, you’ll have to look in a darkened theater!

Oh — and as a quick goodbye, here are some looks that caught my eye at the Critics’ Choice Awards last night. Can you guess which ones I liked, and which ones, well, not so much?